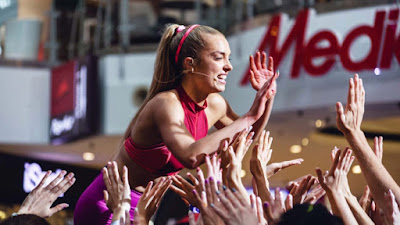 SWEAT is a the story of Sylwie a physical fitness social media influencer who is pushing to get bigger and more influential. We watch as she struggles to broaden her appeal publicly while privately her life is sliding into the crapper as all her effort for public love is leaving a void in her personal life.

To be honest I don’t know what I think of the character of Sylwie, which is as it should be. We can admire her drive, we can feel for the lack of personal connection with anyone behind the scenes, but at the same time we don’t particularly like her. To be certain she is lonely but at the same time a chunk of that loneliness is her doing, she simply is too self-centered for people not to stay away from her. I mean there is the sequence when she goes to a club and all the guys give her wide berth despite he being the hottest girl in the place. Its as if they sense there is something they should stay away from.

That the film works as well as it does is entirely Magdalena Kolesnik. She manages to make Sylwie a person we can’t stop watching. We need to see what happens to her  because despite our better judgment we still care about her, if only out of pity. I wouldn’t be surprised if she is in the running for an Oscar at year’s end.

Ultimately SWEAT is a good film with a great central performance and recommended.