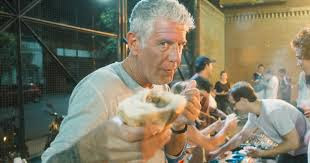 In fairness the only piece on Roadrunner you need to read is Nate Hood’s which can be found here. However since this is a piece is from the stand point of someone only vaguely familiar with Anthony Bourdain I’ve decided to still post it.

This is the story of celebrity chef, raconteur and world traveler Anthony Bourdain. Told  in part through his own words via interviews and unused footage from his TV shows, as well as interviews with the people who loved and worked with him. It is a warts and all portrait of a man who changed the way the world eats.

Hands down one of the most complex biographical documentaries you will ever see Roadrunner will move you in all sorts of directions all at the same time. It’s the rare film that both is madly in love with its subject while calling him an asshole at the same time. Most amazingly you completely understand both points of view and by the time the film ends you’ll be crying at the loss while fighting back the urge to track Bourdain down (who you will swear is still alive) so you can beat the shit out of him because he was such a dick.

If Oscars were given for expressing a wide range of emotions Roadrunner would win in a walk over because no film makes you feel as much as this film does.

As someone who knew of Bourdain but didn’t live and die by his books and TV shows ROADRUNNER was an good introduction to the man who meant so much to so many. I know many who viewed him as a near god, influencing their diet and their desire to travel. Bourdain was a key person in their life despite never having met him. Watching the film I gained respect for the man. I also came to understand why so many people were crushed by his passing even if I never quite felt the loss myself.

I fully expect Roadrunner to be in the awards mix at the end of the year. It’s a great film about a much loved personality. If it doesn’t win an Oscar or two it will only be because the voting body isn’t used to having their emotions played with.

Recommended.Nate Hood’s which can be found here