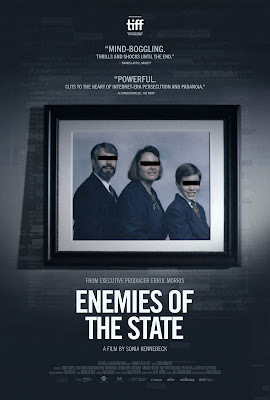 Enemies Of The State is a wild ride. It is a very complex We said, They said story about the Matt DeHart and his family. Matt’s family says he was set up by the government because he was running a server for the hack-tivists Anonymous and the government says that Matt was committing espionage and grooming little kids.  It’s a very convoluted story that will have you wondering what exactly the truth is.

There is a great deal of information to process with Enemies. Filmmaker Sonia Kennebeck lays out both cases and has them competing with each other. This is not done to confuse us rather it’s because how certain events are viewed colors how we feel about them. Additionally as we go along we are constantly getting more and more information which colors things even more.  Its crazy and if you are like me you may get to the end and not be certain what the absolute truth  is.

This is a rare film that treats it’s audience like an adult who can follow a complicated case. I love that Kennebeck gives us the complexity since we get a much richer viewing experience. Even though there is a “solution” we still have doubts and end up pondering the film for hours after it ends.

If there is anything wrong with the film, its that there is so much information coming at us, that things can come off as a tad dry at times. Its never bad, its simply the crush of information is such there is no room for any color that would enliven things up.

Reservation aside, this is a super film. It’s a twisty turny film that grabs you by the throat early and drags you across the floor for almost two hours.