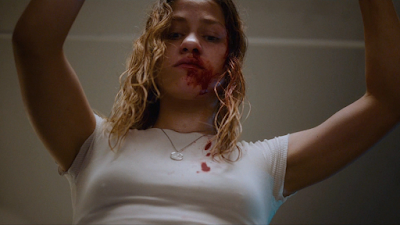 KANDISHA disappointed me. It’s a film with a great plot and some stunning sequences and images that are not as well connected up as it should be.

The plot of the film concerns three young women living in a housing complex in France. When one of them is assaulted  they decide to call on a demon in the form of a veiled young woman to come and get revenge for them Unfortunately once release the demon keeps going and the young ladies have to figure out how to stop it.

I love a great deal about this film. The characters are well drawn, there are wonderful sequences which give us a real sense of life in the projects. Some of the killing sequences are chilling or provoke a reaction. I yelped out loud during the first murder when the target who is being drown grabs a knife and stabs the demon in the face who simply looks at her victim with an unchanging expression before getting even nastier.

The problem with the film is the editing isn’t as tight as it should be several of the scarier sequences are slackly paced draining them of chills (the aforementioned first kill) despite provoking reactions with what happens. There are also a couple of times where things happen or are mentioned and it seems like they are coming out of left field because there seems to be a line or a sequence missing (I can’t explain it lest I give something away).  Additionally the film is wildly low key at times and you have to wonder is this a horror film or a drama such as in the case of one of the girls announcing that she sees the killings from the point of view of the demon. She says it with a real lack of emotion to the point you have to wonder if she is even bothered by it.

I was frustrated. I wanted a sense of suspense and fear that was never generated.