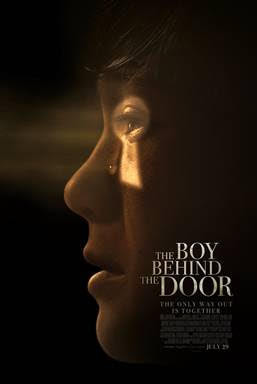 The Boys Behind the Door is a great film. It was made before David Charbonier and Justin Powell‘s second film Djinn abut is being release second. It tells the  harrowing story of Bobby and Kevin who are kidnapped by an evil man. He drags them to his home. Bobby escapes but comes back to save his friend. It becomes a battle for survival for everyone.

If I lived near Charbonier and Powell and I had kids I would give them a wide berth. These guys absolutely have it in for kids since their first two films are basically tormenting children with horrors real and imagined. I suspect child protective services will be after them some time soon.

Of the two films they’ve made, The Boys Behind the Door is infinitely better than Djinn. It has a real world weiht to everything. It’s a film that brings every kid (and human’s) worst nightmare to the screen- being kidnapped – and then amping it up by having a to make the choice about whether to save a loved one still trapped or flee. It’s a twist that makes everything that happens have a terrible cost involved. It gives the film a weight that makes everything that happens even more crushing.

I’m not going to say more because I don’t want to spoil the fun. Then again I will say you will want to get a bowl of popcorn and a beverage of choice and curl up on the couch because this is a fun little thrill ride.