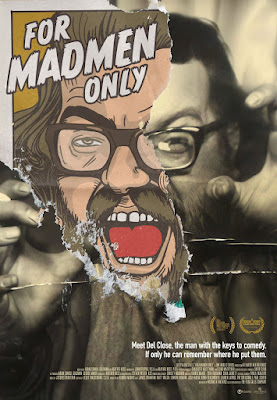 Comedy master Del Close was insane. I mean that literally- he was batshit crazy. However that didn’t stop him from doing improv as Second City or whatever club he was performing at would have a car take to and from the psyche ward. Really.

If you like today’s comedy or if you don’t it’s Del Close’s fault. He was the guy who taught everyone who went through Second City (say Belushi, Ackroyd, Murray, Williams, ect, ect) how to do it. The people who he taught the next generation and that generation taught the people we have now. Almost everyone who does comedy has a place in their heart for Close because he cause he shaped what they and their friends. What all his students gave us is a direct result of what he taught them.

I discovered Close back in the 90’s when I was chasing down comics by  John Ostrander. I wanted to read everything he did. As a result I ran across the comic  Wasteland which DC produced after it decided to allow Del Close to do a comic book. Close would come up with the stories, many autobiographical, and Ostrander would figure out how to get them into comic form. To say that the comic and the stories were unlike anything in comics is putting it mildly. DC was putting out these stories? Really?

I bought the whole run.

I’ve been scarred ever since.

FOR MADMEN ONLY is based on the creation of Wasteland. It takes the tapes that were made of the writing sessions and combines them with clips, interviews (old and new), comic panels and recreations to give us a look at the man who changed the world as we know it, despite the fact that most of us don’t know it. It’s an enthralling affair, that is very messy, often all over the place. There are pieces I absolutely adore and pieces I don’t like and despite that I am thrilled that this  portrait of an crazy man.  It’s a film that matches the man himself.