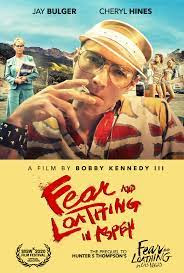 Full confession- I had zero hope for Fear and Loathing in Aspen. I wanted nothing to do with it. I figured it was going to be an over the top gonzo insane film. I knew that Jay Bulger as Hunter S Thompson was not going to work. I just cringed at the thought of seeing the film, but it got sent to me anyway and I put it on and almost instantly realized I was dead wrong about the film- it’s really really good. Its so good I told my friends who are Thompson fans to give it ago.

The plot of the film follows Hunter S Thompson as he runs for Sheriff of Aspen Colorado in 1970. Its told in the style of a 1970 film with changing frame ratios and split screens.

Jay Bulger is brilliant as Hunter. Portraying him as a real honest to god person, as opposed to the stereotypical mumbling Hunter of Bill Murray and Johnnie Depp, we get to see that there is more to him than just the wild journalist. We see him with his wife and son behaving as a dad and hubby and it resets what you think of Thompson. He is no longer the cartoon but as someone who is more than the show. You understand why so many people loved him and why people hated him.  For me, a longtime fan of Thompson,  it was a revelation since I could now see him beyond the bullshit of cliché.

Beyond the central performance this film rocks. It’s a beautifully told story that uses the tropes of cinema from when it was set to pull us in and carry us along. Being old enough to have been alive when the film was set, some part of the five year old me connected to the feel of the film. It all feels genuinely like its 1970.  Where other films like Once Upon a Time in Hollywood do the same time period and come off as dress up this Fear and Loathing comes off as the real deal.

While I’m not going to say this is the best film of the year I will say it’s a great find and one of the joys of my film year.