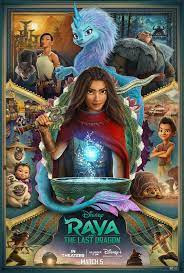 500 years ago all of the dragons gave up their lives to protect the world from a great evil, the Druun.  They left behind a gem containing all of their magic. Raya’s clan became keepers of the treasure. When Raya’s Father attempts to heal the divisions of the various clans he is betrayed as all clans plotted to steal the gem. In the act of treachery the dragon gem was fractured into five parts and the Druun was summoned back.  The world is plunged back into darkness.  Six years later Raya attempts to find the last dragon in the hope that she can then help restore the fractured gem and bring back everyone who was lost.

This is a grand adventure that should have been a multi-part TV series. Yea, the film works but there are moments in the second half where the film could have used way more explanation. There is simply too much to this world and this story that even running an hour and fifty minutes things feel left out.

There is much to like in the film. There is a wonderful edge of darkness to much of the proceedings, for example the clan where everyone is dead is not something you will see in a Disney film.  Additionally from the  moment the film gets on the boat the film takes off as a character driven story. This lifts the film up above most of the other recent Disney animated films simply because the story largely disappears and we are focused on the people growing instead of things getting done. I mean even the baby and the monkey freaking arc. Yes the plot is there but you don’t care, you actually just want to see the characters interact. I was moved several times in the film not because of anything other than because what was happening was keyed to how I felt about the characters.

The one character that is a problem is Naamari who needed to be more developed. Her motions as the “villain” of the piece has her pushed around too much by the plot to be fully realized. (Also the blobby Druun that turns everyone into stone really doesn’t make a hell of a lot of sense- I mean why? Wht do they get out of it?)

To me the biggest problem with the film is the fact that it is very Disney. It’s very family friendly (for example we know at the start if the gem is healed they can bring everyone back) and the film keeps slipping out of darkness for a happy family moment. While it’s clearly a step into more adult and more mature/complex story telling, the plot trajectory is pure formula and you know how it’s going to go.

Reservations aside. I really liked it. More so in the second half when the cutesy set up is gone and we can focus on the characters.