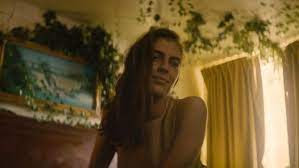 AYAR is a one of kind cinematic experience that melds a variety of styles and genres into a film that is a wild ride.  If you’re like me you may not be certain of what you’ll think of the entire ride but I suspect you’ll be glad you took it.

The film is nominally the story of Ayar, a young woman who returns from Las Vegas to LA homing to reconnect with her daughter who is being raised by some one else. Its been a few years and Ayar gave up he daughter to pursue a singing career and a romance that imploded.  She is living in a motel room which is being over grown by vines. She is living next to a woman who may or may not have covid. We get to know her and the people around her. Somewhere along the way the film begins shifting going into unexpected directions including turning into  a meta exploration of the making of the film.

The film is a disorienting trip. Subjective collides with objective, making of collides with narrative and conventional collides with experimental. The result is film that grabs you and drags you along. You can’t help but stay staring at the screen because you don’t know what piece of magic or unexpected turn is coming next. I couldn’t look away. It’s a hell of a ride unlike any other.

While I was watching the film I was absolutely enraptured. I had to see how it was going to go. The problem with the film is that as thrilling as the ride is, it does go all over the place. Some where in the final twenty minutes you begin to get a sense that some of the film could have been trimmed. The sequences aren’t hanging together as well as before. When the film was done I was exhilarated by the ride but I didn’t know if I liked it simply because I don’t know if everything gets pulled together enough to be satisfying.

My uncertainty of the finished product aside, AYAR is still worth a look for the cinematically adventurous