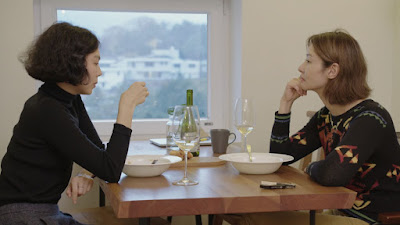 I haven’t seen a Hong Sang-soo film in several years. I am not a fan. I am of the opinion that you could probably cut all his films together into new films and if you did it right no one would ever know. It’s not that they are bad but they are all almost identical. I know directors remake the same stories over and over again but Sang-soo really does.

This year because the New York Film Festival was virtual I decided to try his latest offering. The Woman Who Ran. This time out a woman goes to visit two friends and then runs into a third.

My reaction to the film was rather surprising since while the film’s interactions felt like almost every other one of his films this time out the film felt wrong. It felt like it was made by someone with less skill than Sang-soo. It feels like a film made by an ultra-low budget filmmaker putting together a film for a first time. The setups are minimal and there is a jaggedness to them.  There is also something I haven’t seen in almost five decades which is a reliance on the zoom.  Not having read the press notes I’m of the opinion that this was made ultra-low budget , probably on a cellphone since I can’t imagine a reason for the way the film looks.  (Perhaps this is a student film)

As I said I am not a fan of Sang-soo. However it’s not that I hate his films, I hate that he is telling essentially the same story over and over again- though admittedly this time there are differences. At the same time while I hate that NYFF programs every one of his films every year (People STOP there are other filmmakers out there deserving to be showcased)  this is the first time I've run across one of his films where I am honestly and truly wondering why the hell they programmed it.  Even if the film didn’t feel like a weekend project made at the deadline, the film isn’t very good. There is nothing here we haven’t seen before and it isn’t particularly well done.

The truth is having gone through a good number of the NYFF films that I didn’t like, and while I have questioned why the films were at the festival in my reviews- this was the first time that I could not come up with even a bad reason as to why it was playing. This one eludes me since this is by far the weakest Sang-soo I’ve run across.

Recommended for Hong Sang-soo cultists only

(Note to the cultists- could you please let me know what you have on the NYFF programmers that you manage to get a new film in every NY Festival every damn year.)