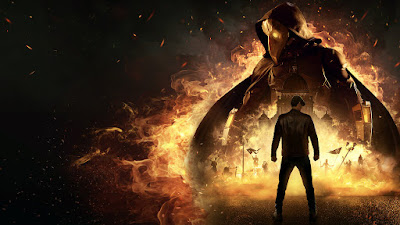 Major Grom is a police investigator with a knack for both clearing cases and pissing off the brass. He has no super powers however he is very good at working out how something will play out. As a result he has managed to retain his job despite causing destruction on a grand scale. Grom is called into action when a villain calling himself The Plague Doctor appears and is killing off the super-rich and the privileged.

Based on a Russian comic book which was turned into a kick ass proof of concept film (it covers the opening armored car robbery) Major Grom is an entertaining action film. It’s a film with great characters and greater action. Grom is a hero that we all could be if we were in better shape… and had lightning reflexes and unbeatable fighting skills.

Going back four or five years ago I met the men behind the comic, and the film at New York Comic Con. Back then they were trying to wrangle a feature deal and trying to answer all the questions from everyone who were standing at their booth watching the short film which was on continuous loop. What I love is that the passion and love seen in the short carried over to the feature.

If there is any problem with the film it the pacing. Running 138 minutes the film could use a little bit of trimming. I’m not sure what I would cut but there are a couple of bits in the second hour when it could have moved a bit faster. However ultimately that’s a quibble since the film is one you are going to want to see repeatedly.

Actually  a sequel is set up in one of the two mid end credits sequences.