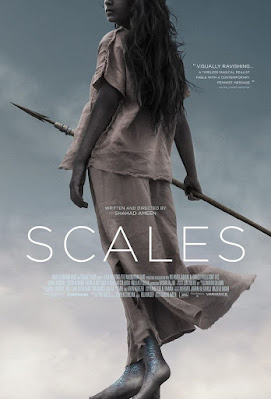 SCALES is visually stunning film. It’s lovely fairy tale that is must for anyone who wants to see a lyric tale told in a moving way.

This is the story of Hayat, a young girl saved from death by her father who refused to sacrifice her to the sea creatures that live off the coast of their village. Growing up she is considered a pariah  however she decides to end the madness and takes matters into her own hands and hunts the beasts in the sea.

A feminist tale that is a biting commentary on the treatment of women in Saudi Arabia, the film is a stiff rebuke to the patriarchy. I’m kind of shocked that authorities allowed the film to be finished.

The film is a shot is a stunning monochrome. Unlike some films where the black and white is a choice, the use is vital to the film.  The film would not feel as dream like in color. The images would not have the power to enchant us. Watching the film I was struck by the notion that had this film been in color it would have been instantly half as good simply because the images wouldn’t have had the power to move us.

And while I am absolutely over the moon about this film I do want to say that I will be the first to say it isn’t perfect largely the pacing is a bit too leisurely.  I suspect the need to make the run time come in at least 75 minutes resulted in the choice of letting a couple of sequences go on a bit long.