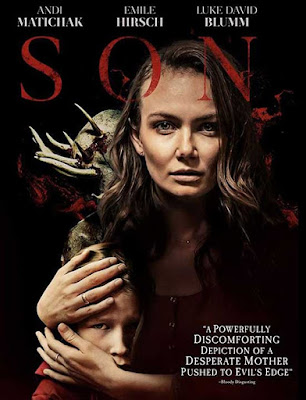 Single mother with a past has to face people trying to take her son from her. As she fights to keep her son, her son begins to get ill. Will she be able to save the boy?

Okay time killer has some really nice moments and a wonderful lack of jump scares. This is a film about the characters and the plot which makes it an interesting change from most similar films.

If there is any problem with the film is the fact that odds are you will know where this is going from the opening minutes of the film when the mother gives birth after fleeing  from some terrible place. I knew how this was gong to go, and while I didn't mind it, this is a well made movie, I just kind of wish someone didn't follow the plotting of a dozen other films.

Still there is enough here to make it worth a look.