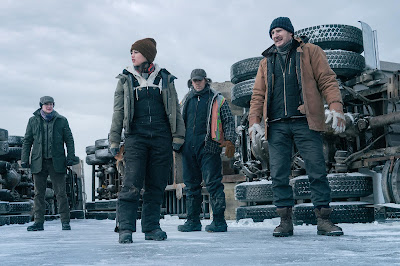 I liked the Ice Road. To be certain it doesn’t do anything new but it entertains which in this case is enough.

The film begins when there is a cave in in a mine in Northern Canada.  A lot of men are trapped. They can’t begin rescue operations until they can vent the methane-however they don’t have the equipment to do so. The only hope is to truck it up the ice road, the problem is its late in the season and the ice road is melting.  Three trucks set off in the hope of reaching the mine in time.

Mindless fun from top to bottom, you can pretty much guess how this will go. Some people will live, some will die, and you will instantly know that something is wrong when the insurance guy insists on tagging along (oh come on, if you’ve seen any number of these sort of films you know it isn’t a spoiler because he clearly is the odd man out).

I had a blast from the get go. This is a film that doesn’t take itself seriously and just moves like the wind. High art it is not. Popcorn chopping entertainment it is.

I loved that Liam Neeson gets to play his typical action hero with some shading. When was the last time he even remotely acted? I don’t know. However here he gets to do more than just be quippy and kill people. I mean the relationship with his brother is such that it resonates way more than it really should. It’s a nice change of pace.

I also love that this is on Netflix. Yea this would have been great on the big screen but at the same time this is so cliché that the film would have floundered on theaters as people debated if it was worth paying 15 bucks to see it. It would have taken ages to find an audience. Now however everyone can just tune in and be entertained.

I also love that it probably won’t get a sequel.  Where do you go?

Ultimately this is a great fun film that’s worth a look.