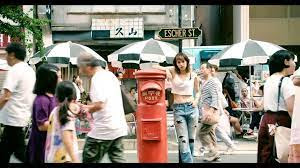 Red Post on Escher Street is going delight many of Sion Son’s fans and annoy others.  This skewed love letter to the movies and the extras that fill the backgrounds is a film that you have  go with before it pays off. It is a film that asks us to juggle a lot of pieces before they are put together at the end.

The plot of the film is nominally the story of a filmmaker trying to make a retirn independent film after shifting toward the mainstream (much like Sono himself). He hands out fliers for an open casting call.  As everyone comes in to audition we get the stories of the extras, the filmmaker as he tries to put the film together and various related people to all the stories. How they interact and come together is the film.

The reason I say you have to work with this film is that the focus of the film shifts every ten or fifteen minutes. New characters come in to replace ones we were following. While we will run across people we’ve met before Sono is constantly introducing us to more and more people. The result is that we feel the films’ almost 150 minute run time because the film never builds momentum, even as it builds to a climax.

And if you are wondering why I am not saying more it’s because I am still processing the film.  It’s a film I need another pass through because it didn’t come together for me until I got to the end and then it snapped into place for me. Once it came together did  I realized that I needed to watch it a second time so I could properly reference all the connections- but I realized that in order to make the deadline for the festival I was going to have to wing this review since I didn’t have another two and a half hour block.

My desire to see the film a second time aside, this is a really good film and is recommended when it plays at the North Bend Film Festival