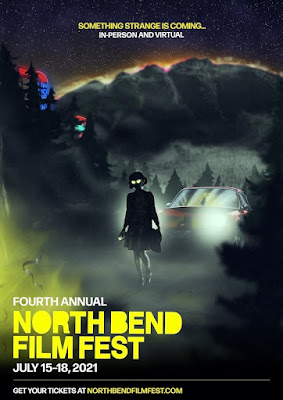 The North Bend Film Festival starts Thursday and if you can make an effort to see something.

Yes I know the world is opening up but the fine folk at North Bend have made arrangements and they are going both in person and virtual this year, so there is no  reason not to take part.

In years past I was aware of North Bend but I never really covered it because of where it landed. It always hit my calendar after I had scheduled something else. However I moved closer to covering it when it was one of the five festivals that formed the Nightstream Festival last year in order to give fans a super festival in a covid world.  And because of covid this years festival fell at an opportune time so I dove in.

Having seen most of the features and a handful of the shorts  I can honestly say if something hits your eye, see it. While I have liked some films more than others , all of the films are worth seeing.

What films do I recommend? Well I’m glad you asked…

SWAN SONG has the magnificent Oscar worthy performance of Udo Keir as a retired hairdresser making a trip to do one last job. Its one of the great films of the year.

LUCHADORAS is an excellent documentary about a group of women who are using wrestling to get the message out about the dangers lurking in their small town in Mexico where there is a wave of crimes against women.

WITCHES OF THE ORIENT is a one of a kind documentary about the unbeatable women’s volleyball team from Japan that won the Gold at the 1964 Olympics.

TAILGATE is a frightening film about a psycho hunting the road killing those who he feel wronged him. This is better than most other recent psycho on the loose films.

There’s more but you can start with those.

For more information and tickets, both in person and virtual go here

In regard to NYAFF I do not know what movies will be added or what films will be in person and just virtual.

Twitter I announced that I would be doing a series in response to "Film Twitter's" insistence that there are only five or six filmmakers we should be following (Tarantino, Scorsese, Spielberg....), all of whom have been around since the flood. In their minds they are the only one's that count and should be celebrated. It seems in the mind of "Film Twitter: that no one beyond their five or six are doing anything interesting.

They are dead wrong

To prove them wrong I will be looking to point out a bunch of filmmakers who are doing wonderful things, and changing cinema and storytelling in really interesting ways, ways most of their calcified gods can't imagine.

The series will run Sundays starting in August and continue at least through September- because lets face it -there are so many great filmmakers out there no one is talking about, that someone has to highlight them.

I did not secure a public badge for New York Comic Con. As much as there are things I would love to cover,  the need to hang on line for hours was not possible.  Make no mistake I love the con, I'm just at the point where the need to spend hours sitting trying to get tickets is not something I can do (I have too much to do for this site).

I have however put in for a press badge so I am hopeful.

My attitude toward the TOMORROW WAR is it is one of the stupidest films I've ever seen. Sure its spectacular and has great monsters but nothing in it makes a lick of sense. Its stupid as a stick with a plot that is best described as a hole.

Anyone know if  the complete FIREFOX was ever released to home video? Actually is there any version that has the different cuts of the film?