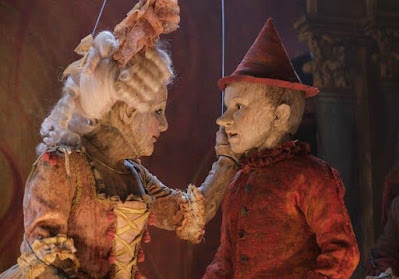 Matteo Garrone's PINOCCHIO maybe as close an adaption of the novel as we are going to ever get. I say this as some one who had the novel read to me by my mother when I was very young  and had it haunt me four over four decades.
Garrone's film is absolutely beautiful. It is a film that lives and breaths and has a real tactile feel to it. We can physically feel and smell the various locations.  It is a world where magic and reality blend and always feel real. Somehow Garrone has made a film where we honestly and truly believe that a puppet could come to life.
What I love here is the darkness of the tale. There is dirt and grime and bad things happen, for example Pinocchio's feet are burned off. The violence is ugly, for example the donkey version of Pinocchio is thrown off a cliff with a rock around his neck. This is the stuff of nightmares. I can only imagine what parents taking their kids to se this late last year thought when the darkness of the novel appeared on screen. I'm going to guess that they were unprepared for it since they probably only know the Disney version.
I loved the cast. Even Roberto Benigni, who made his own version of the story two decades ago shines.
To me this is a solid little film that's worth a look.
Posted by Steve Kopian at July 03, 2021