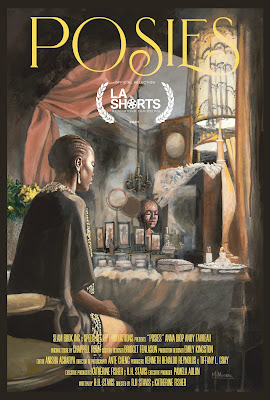 I was sent POSIES in  order to get word out of  the World Premiere tomorrow at the LA Shorts International Film Festival. I kind of wished I hadn’t said yes, not because it’s a bad film, rather because POSIES is a film that is impossible to write about because what the film is will be spoiled if I say too much. This is a film you can only really discuss until you get to the end.

I can say that the film is about a woman who is putting flower petals under her skin. She is doing this because people are devolving into monsters and she wants to stop it. Beyond that I can’t say anything because where it goes and how it goes is the film.

This is a beautifully made, wonderfully acted film that pulls you in and takes you for a ride through unexpected territory. It’s a heady film that raises some interesting issues about how we see each other and…. Well that would be telling and I can’t tell you lest I spoil the sting in the tail.

Posies is a killer film and a must see – especially if you can do so as blind as possible.