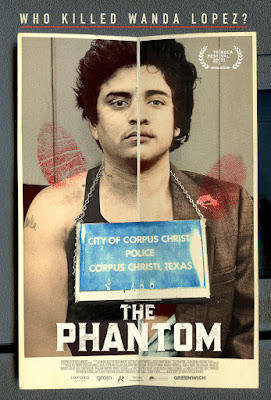 Carlos DeLuna was executed for the brutal stabbing death of a woman who was working at a convivence  store and gas station. The murder recorded by the 911 operator. DeLuna was arrested less than hour after the killing, stopping the police chase of another man. DeLuna insisted he was innocent but he was found guilty and executed for the crime. The trouble was that he didn't do it...

This is a great story unevenly told. I mean this is one hell of miscarriage of justice that is prime example why the death penalty is a bad idea. Unfortunately as compelling as the story is the choices made in telling it are less than ideal.

The problem with the film is that the film takes most of its running time to simply take us to the execution. The only real discussion of DeLuna not being guilty is limited to his insistence it was a David Hernandez that people are supposed to know, and the question of why he wasn't covered in blood.

It is not until the final half hour that the all the problems with the case. And that's a big problem because the final half hour flies by and doesn't go into a lot of questions. For example any real proof of official misconduct, such as real killer Carlos Hernandez being a police informant, and thus let off the hook, is only inferred and never proven. Yes, we have the stories of his telling people he did it, and I believe it, but the bigger issue of corruption isn't really there. On the other hand police indifference and racism is.

Forgive me as compelling as this tale is, as frightening and sad it is, the film doesn't do what it wants to do. This is a film that wants to use this story of injustice to make us pissed off at everything that went wrong. Sadly despite being a compelling film from start to finish, the film never ties it all up. Yes it was a miscarriage. Yes authorities didn't care because the were racist, but beyond that there is nothing. Patrick Forbes never proves more and since he was clearly aiming to do so, he has made a film that's "okay" instead of great.

Worth a look because its a hell of a story but not because you'll get any grand revelation.