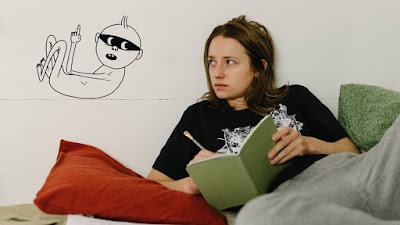 Ninjababy is a great film.  It’s a fantastic slice of life based upon Inga Sætre‘s autobiographical graphic novel that will win you over and should you be someone who can relate to our heroine, it might be one of your favorite films of all time. (yea it’s that good)

The film follows Rakel a twenty something young woman who has list of things that she wants to be. Nowhere on that list is mother. Unfortunately life has decided to mess up Rakel‘s plans and pushes her toward motherhood. However things are complicated because the dad is a one night stand (the dad is her aikido teacher whom she slept with because he smelled good) and she isn’t sure what do .

What Rakel does is the film and it’s a great journey. I say this not because it’s touchy feely good time but because it is a journey we haven’t taken before. It is a trip that isn’t down well work paths and as a result is frequently surprising. More importantly it’s a story that feel lived in. Yes this is  essentially a true story, but even if it wasn’t I would swear it was. There is a connection to life that we don’t often see. Even if this wasn’t autobiographical you can still feel how this had to be real, I mean how the characters turn is not how any movie characters I’ve ever seen turn.

Helping the autobiographical nature of the film is the first rate cast.  There isn’t a bad performance anywhere in this film with the result we completely believe everything we are seeing is real. If Oscar gave an ensemble award I would hope they would be in the running.

I love this film. I loved it to the point of stopping the film and emailing several friends to say they had to see it.

This is a wonderful film and highly recommended when it plays at the North Bend Film Festival or anywhere else you can find it.