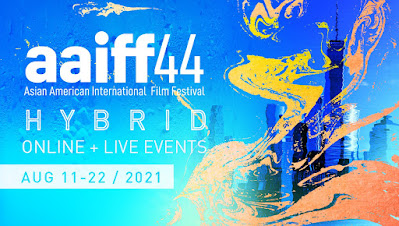 July 19, 2021, NEW YORK – The 44th Asian American International Film Festival (AAIFF44) will kick off on Aug. 11 with the New York City premiere of its Opening Night film SNAKEHEAD by Evan Jackson Leong, with an exclusive in-person screening. The festival will take place from Aug. 11-22. Combining in-person events and online programs, AAIFF44 will be a hybrid festival. Early Bird Gold and Cine Pass are currently on sale at https://www.aaiff.org/ with limited-time pricing that ends on Aug. 4.

Based on a true story and featuring a New York-based cast, SNAKEHEAD centers on Sister Tse (Shuya Chang) and her attempt to survive in New York’s Chinatown as an immigrant while she gets caught up in an international crime ring of human smuggling.

The in-person Opening Night Screening of SNAKEHEAD will take place on Aug. 11 at Regal Essex Crossing & RPX in New York City with cast and crew attending

The film will then be available online from Aug. 12-14 on CineSend, the official online screening platform of AAIFF44

Tickets for both the in-person Opening Night screening and the online screening are now available at https://www.aaiff.org/aaiff44/snakehead-opening-night.

Tickets to SNAKEHEAD and all other programs and events are now available:

The Early Bird Promotion ends Aug. 4, after which Gold Pass and Cine Pass will be sold at $250 and $150 for Regular Prices

“We are so excited to return to New York City to celebrate the magic of cinema together again. With new categories and awards this year, we can’t wait to meet everyone in-person!” said Festival Director Kayla Wong.

AAIFF continues to partner with the Mayor's Office of Media and Entertainment this year to highlight New York City-produced films.

“We are proud to support the 44th annual Asian American International Film Festival, especially in these times when Asian and Asian American voices need to be heard,” said the Mayor's Office Media Entertainment Commissioner, Anne del Castillo. “The films and programs featured in this year’s lineup shine a light on stories that represent the rich diversity of our AAPI community.”

More in-person events and the full lineup of AAIFF44 will be announced by the end of July.

The Asian American International Film Festival (AAIFF) is proudly known as "The First Home to Asian American Cinema." Organized by Asian CineVision, it's the first and longest-running festival dedicated to showcasing the moving image work by media artists of Asian descent for and about the Asian diaspora experience. The Festival takes place in New York City, the second-largest Asian-American market in the U.S. Every year, AAIFF attracts audiences from all five boroughs of New York City, the tri-state region, and around the world.

Films submitted and screened at the festival are eligible to participate in our National Tour program, bringing Asian diaspora stories to broader audiences across North America through a rental service for cultural and educational institutions.

The 44th Asian American International Film Festival is made possible with support from the Academy of Motion Pictures Arts And Sciences, Mayor's Office of Media and Entertainment, Citibank, AARP, Taipei Cultural Center of TECO in New York, Philippine Consulate General in New York, Tamiment Library and Robert F. Wagner Labor Archives, NYU Special Collections, SAG-AFTRA, CUNY Graduate Center, and the friends of ACV. We are also pleased to have AsAmNews as a Primary Media Partner this year.

Email ThisBlogThis!Share to TwitterShare to FacebookShare to Pinterest
Labels: AAIFF 2021