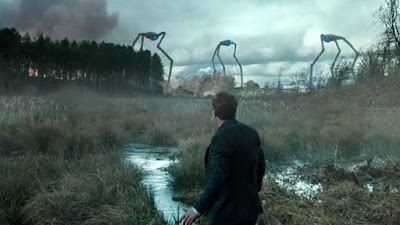 This three part period adaption of the HG Wells classic made waves when several sequences of the Martian attacks hit the internet. Everyone was excited to see the series and we all waited for it to hit American screens. The trouble was if it ever did the vast majority of people seemed to have missed it. I know I completely missed it and had to catch up with via an import DVD. Having seen it I kind of understand why it’s become MIA.

Magnificently made, beautifully acted this adaption has some of the best representations of scenes from the novel put on film. The sequences are stunning with the attack on the Thundechild  being one that will live in your memory forever.

However the trouble is the film is ultimately just a bunch of sequences, the arrival, the naval battle, the red weed. There is no real attempt to link the sequences up.  Yes there is enough to move the story, but there isn’t enough to make us care. We don’t get real character development we just gets scenes  with no sense of what happened between them.

I was disappointed. I wanted a film where I cared about the characters. Instead I got tableaus. Yes they come to life but they don’t feel like an organic story.

That said the sequences are spectacular which makes the series worth a look when it plays, but it isn’t anything worth searching out