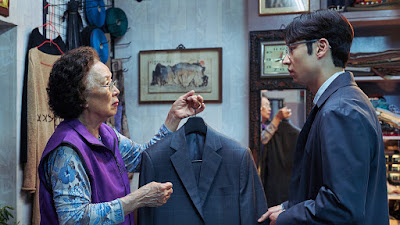 I CAN SPEAK is a surprisingly moving film about a bitch on wheels senior citizen who runs rough shod over everyone so that laws are followed and developers don’t take over her humble home. She runs head long into a young civil servant who is also by the book but also has a strong sense of right and wrong. When she discovers that he knows English and is willing to teach her she begins to thaw.

Bring a hankie because you’re going to get misty- though not for the reason you think. The need for the hankie comes the reason she wants to learn English, dealing with a lost relative and the damage caused by being a comfort woman during the Second World War. Unlike many films that go for cheap emotion I CAN SPEAK earns it’s tears. We’ve made the trip with the characters and we feel for them.

While on some level the structure of the film is par for the course of film like this it really doesn’t matter since the cast puts it over. We like everyone and we want to see what happens to them. There are also enough twists and turns that we are kept interested. It also doesn’t hurt by the fact that this is based on a true story.

What a delight. A hidden gem of NYAFF.

Highly recommended- especially since so many of NYAFF’s films are bleak downers.

For tickets and more information go here.
Posted by Steve Kopian at July 09, 2018