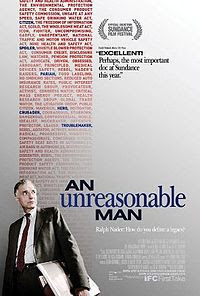 This is a warts and all look at Ralph Nader's career from when he was pushing for auto safety through his Presidential runs. This is an interesting look at the man and his passion to do what he felt was right. He changed the country and the world for the better and made things much more safer for all of us. An uncompromising fellow, Nader my way or the highway stances lost him friends when some of his "raiders" went into politics in the Carter Administration and didn't do what he felt was right. More recently Democrats who needed a scapegoat. blame him for the election and re-election of George W Bush (Which is probably true on some level). Big Business of course hates his guts. Watching the film I still find that I admire the man, however I don't necessarily like him, his pit bull mentality seems to have created the sort of fellow you'd want to punch in the face occasionally just because its probably the only way to make him listen.

For those who want to see who the last four decades of "consumer" issues have played out this is must see TV, for anyone else who simply wants to spend time with a real character are also encouraged to take a look see.
Posted by Steve Kopian at January 19, 2019