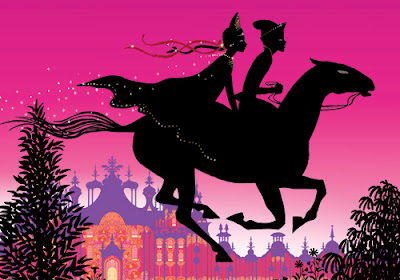 With IVAN TSAREVITCH AND THE CHANGING PRINCESS: FOUR ENCHANTING TALES playing at Animation First  this weekend (for tickets go here.) here is a slightly edited repost of the review I ran after the New York International Children's Film Festival ran the film in 2017.  It also includes video of the Q&A Mr Ocelot did following the screening.

IVAN TSAREVITCH AND THE CHANGING PRINCESS: FOUR ENCHANTING TALES
The first film was from Michel Ocelot. Its four fairy tales that are linked together by actors and director putting them together and performing them.

One story concerned a girl who lived in a cave who was able to tame the monsters that kept her and her people trapped inside. The film is allegory about not letting superstitions and wrong thoughts get in the way of finding happiness.

The second story concerned a a young man who was taught by a sorcerer all his tricks, but there was a catch to the knowledge.

The third story had a young pirate who liked his cat more than anyone and what happens to him.

The final story was the titled story and it's based on a Russian folk tale that Ocelot modified so that the Prince is attempting to cure his father of a fatal disease and involves a princess who changes when a man touches her.

All the stories are told in Ocelot silhouette style of animation. The tales were originally created for Ocelot's earlier TALES OF THE NIGHT but ween't used.

To be honest the tales themselves are very good however since the films are kind of stand alone the linking of them doesn't always work. Still this is a really good film, especially when the stories are being told.

After the film Ocelot spoke to the audience via Skype and he was absolutely charming. He answered all the kids questions and was only cut off when tie ran out.

For tickets to the Animation First Screening go here
Posted by Steve Kopian at January 22, 2019