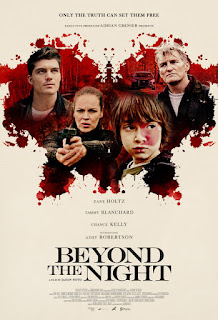 This is one of those films that you should know as little as possible. Nominally the story of a father who is desperate to protect his son when he begins to reveal details relating to a long missing mobsters daughter, there are details which I can’t reveal since it might give away too much. If you just want to see a nifty little thriller filled with great characters and great performances the see Beyond the Night and stop reading now.

However if you want to know more and don’t mind me kind of spoiling a little bit then keep reading...

You still with me?

If you watch Beyond the Night odds are you are not going to know where the film is going. I walked into the film completely unaware of anything other than the bare minimum plot. Because of this and because it is a distance in before the film truly reveals itself I was unprepared for the hints of supernatural doings.

No, wait come back it’s not bad. Trust me. Because writer director Jason Noto has so perfectly crafted his characters and plot the added layer fits in perfectly. We don’t question it, we simply go with it, which is the mark of a really good film. You accept that maybe there is a reason from beyond the grave that the kid knows what he knows. Noto has made a taught thriller which you will walk out of talking about as a good film and not one that takes a turn for the genre.

I kind of admire the PR people handling the film. Choosing not to highlight what maybe going on is a bold move. Many people would highlight that and as a result it could potentially limit its audience instead they are focusing on what is important, which is that this is nifty film worth your time. If they are shying away from mentioning the supernatural, why am I? Because a portion of Unseen’s readership has a yen for the genre. Mentioning it will, hopefully, push some readers towards seeing the film faster.

Opening Friday. Beyond the Night is recommended for anyone wanting to see a really good thriller.