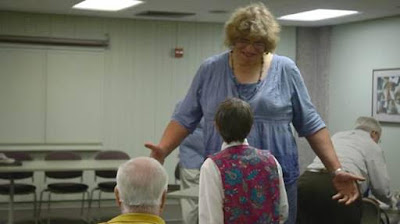 I don’t have a great deal to say about MARKIE IN MILWAUKEE other than see it. This is a portrait of a giant of a man who transitioned into being a woman and decided to transition back because of his faith and reaction of his family. It is a deeply moving portrait of a person trying to find themselves in their own eyes and the eyes of God.

The reason I don’t have a lot to say is because I don’t want to talk about Markie, rather I just want to go up to him and give him a hug and say I’ve got your back. That’s a weird reaction to have to a film, but it’s a testament to Matt Kliegman's film which does more than just show us an interesting character, but instead makes us his/her friend.

While Markie is going to get all the attention, we need to take some time out and note how good a job Kliegman did in putting the film together. After seeing the film I genuinely feel like I’ve been hanging out with Markie for years and not an hour and a half. Kliegman‘s ability to do that is rare because most filmmaker don't often manage to have the walls between a subject and the audience be so utterly obliterated.

Yes, this is a film that is more than just a portrait of person trying to find themselves, this is a thoughtful and thoughtful examination of what the self is. What part does belief and religion play in all of that? Kliegman gives us much to chew on and a couple of weeks after seeing the film for the first time I am still pondering it. The fact that I am still pondering it is another reason that I don't have a lot to say right now. The fact that this is a film that requires interaction with it is what makes it so great. We can't simply say it was good and move on, but we much wrestle with it.

This film is a masterpiece. It is also one of the best films at Slamdance and highly recommended.
Posted by Steve Kopian at January 27, 2019