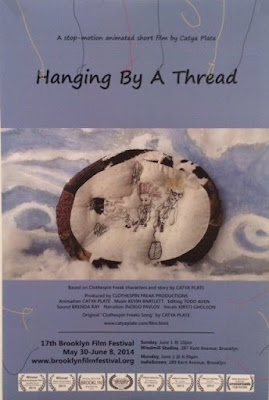 Catya Plate is a singular talent. The films she produces are unlike anything else out there.

A while back I reviewed and loved her film MEETING MACGUFFIN. It’s the second part of a trilogy about the recreation of humanity from parts. I loved it so much I pondered about the first film and Ms Plate was nice enough to send HANGING BY A THREAD to me. It took a while for me to see it- I wanted to be sure I could just focus on it and not feel rushed, but I finally watched it.

HANGING is another trip. Setting up the events in the second film it has three characters on a piece of needle point coming to life and deciding to reconstruct the human race from the pelvis, feet and brains that are drifting around. And... there is a dance number.

Less detailed plot wise as the second film, it sets the mood and gets everything going. It’s a wild trip that would probably out surreal/weird even Salvador Dali. Yes, that is a rave.

One of the things that mazes me is is how she manages to animate the things she does. Thereis this one point where we see the underside of the needlepoint and there are all these threads and not only does she aniate them but the threads don't show signs of anyone touching them. Its a amazing since when Willis O'Brin did King Kong you could see ripples in Kong's hair. Plate's work so no sign of an off screen god and it blows me away.

As I said at the top Ms Plate is a singular talent. I can’t wait for the next film.
Posted by Steve Kopian at January 13, 2019