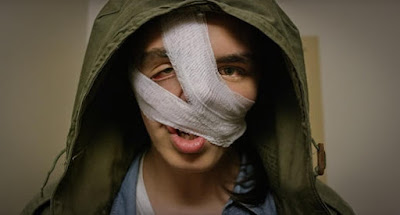 Alexandre Franchi's HAPPY FACE is a wonderful little film that will put a smile on your face and tears in your eyes.  It is one of the unexpected pleasures of Slamdance.

Stan tapes up his face to appear disfigured. He is trying to come to connect with his mother who is being ravaged by cancer. When Stan's masquerade is discovered he  fights to be allowed to remain part of the group which has become his found family. As Stan helps his friends come to terms with their problems they in term come to help him deal with his fears.

Before you ask, yes the film does hit some of the themes and points you'd expect a film like this to hit. At the same time Franchi does a few things that are unexpected with the result the film never feels like something we've seen before.

Helping a great deal is the fact that Franchi has found a killer cast of actors. Everyone on screen is actually a person with some sort of difference. It may sound like a "no duh" thing to say but the fact that we are watching real people on the screen makes the film all the more real. If you ever need an game set and match reason as to why filmmakers, and all of Hollywood needs to hire real people and not make up artists, bring up this film. Seeing David Roche, Cindy Nicholsen, E R Ruiz, Dawn Shaw and the others adds a layer of humanity that seeing say Angelina Jolie with a rubber face could never duplicate. Seeing all these fine actors on screen makes the film connect us to the story all the more.

I really liked HAPPY FACE a great deal. And by the time Stan offered his mother some french fries and vinegar I was gone, reaching for a tissue to mop up the tears. 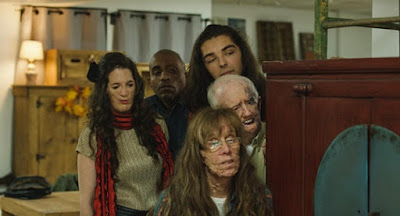