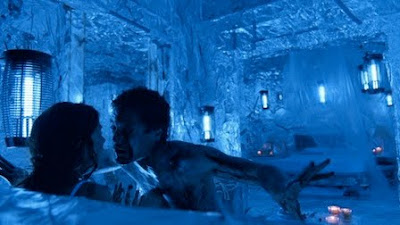 Lost and alone, hiding from her ex-con husband, Ashley Judd spends her time in a run down motel working and partying. When she meets a shy withdrawn man who seems nice she ends up drawn into his world and the insanity that lives there, a world filled with tiny bugs.

A wonderfully acted trip down the road to hell this is a movie that is a true horror film. There are no monsters or serial killers just a trip into the minds of two people who bond and feed off each other.

Brutal and graphically violent at times, this is more disturbing for what it says about the need for people to belong and the willingness to believe in order to do so.She needs his kindness and he needs some one to believe him. Together they mesh perfectly in a yin and yang circle of destruction. Whats scary here is that as the film progresses we begin to go along with the idea of the existence of tiny bugs. We, as outsiders, know that the bugs don't exist, but we are sucked along with the characters as their mania is allowed to run rampant and as things go on we begin to believe, perhaps fleetingly that maybe there is something to the story. Its a frightening thought that anyone could lose themselves in a situation like this, but it happens every day, one need only look at the news to see people living in personal little hells.

I was left disturbed for days after viewing this movie. Its not for most people, but those who want to be challenged on most levels should search this film out, it will rock your world.
Posted by Steve Kopian at January 06, 2019