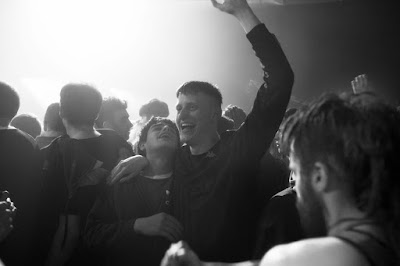 Based on a play by Keiran Hurley BEATS tells the story of 15 year old Johnno and Spanner in the days leading up to the passage of the the 1994 Criminal Justice and Public Order Act which banned unauthorized gatherings where music with a beat was played. The idea was to stop raves from happening. This is to be the last summer together for the two young men. Johnno and his family will be moving and Spanner faces an uncertain future. As their time together is coming to an end the pair spends their last days together.

I liked BEATS but I don't quite love it. The film has some truly transcendent moments, some great exchanges and a very good score but I never could shake the feeling that as hard as the film was trying to be "great" and be a film that made you fall passionately love with it, it was never going to be more than good and a one time dinner after work sort of thing.

The problem is is that the film hits every coming of age note you think it will. This is the story of one last blast and a thumbing of nose at authority before disappearing into the lives that we are expected to live. While the details vary this is very much like any other coming of age tale. I know that is partly intentional since in the press notes director Brian Welsh talks about how the source play resonated with anyone who saw it. I think for me the problem is that in opening up Keiran Hurley's play  didn't quite work. What worked on stage as essential a monologue with music doesn't translate as well with characters. In a monologue you can get away with a bit of cliche, but that doesn't quite work when actors portray the characters.

My other problem with the film is I really don't like Cristian Ortega as Johnno. Or is it I don't like the character? I'm not quite sure. The problem for me is that as written Johnno is more a reactor than an actor. He is our surrogate and he walks through the film in our stead and while he takes part in the events he more often than not seems to be watching until events simply overwhelm him (the rave). While Ortega is never bad, he is never really given much to do and so he seems more like a lost puppy with his frightened posture and doe eyes.

While I'm not sure it all hangs together there are moments. The rave is exceptional. There are some lovely exchanges between the two friends  and the acting is across the board wonderful. Everyone outside of Johnno seems to be real characters.

I feel really bad not absolutely loving this film. I went into the film with high hopes, owing in large part to the Steven Soderbergh's name which is being splashed across some promotional material you'd swear it was his new film.

Is BEATS bad? No, not remotely. Frankly I do like the film, I just don't love it, which is something it seems to be trying very hard to make me do.
Posted by Steve Kopian at January 29, 2019