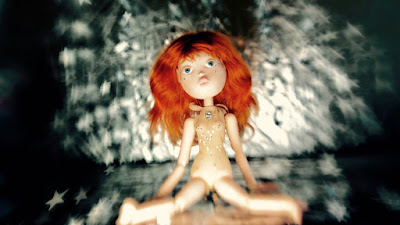 Boundary pushing, entirely un-PC film is not remotely for most audiences. A no budget puppet film about the objectification of a teen pop star is as in your face and you can get.

The film is the story of Junie Spoons who was pushed by her mother from when she was toddler to become a superstar. We then watch as she becomes that star and then crashes and burns in a typical behind the tragedy cable documentary.

While I don't particularly care for DOLLHOUSE as a film, it's too jagged to really support a 75 minute film, I do have to give director Nicole Brending a several minute long standing ovation for making a film that basically lays sexuality and misogyny in entertainment and society on the line and forces us to deal with every damn issue she raises beginning with hyper-sexualization of preteen girls and everything that follows that in entertainment and society as a whole. It is a scorched earth film that takes no prisoners and leaves everyone broken and bruised.

While not for most audiences, Brending has made a film that is going to challenge pretty much everyone at some point, this film is going to develop a group of loyal fans. Yes, the film looks cheap, but Brending had to do it this way because it was the only way for her to make the film she wanted with no interference-and we are so much better for it. Yes, the film is incredibly un-politically correct with jokes that some times make you wince, but it was the only way to make her point and make it sting enough that maybe she can change our way of doing things.

DOLLHOUSE: THE ERADICATION OF FEMALE SUBJECTIVITY FROM AMERICAN POPULAR CULTURE may not be the best film of the year but it is one of the most vital and alive. It is a film that anyone who thinks they can suffer the slings and arrows of an in your face assault on how you think should see.

One of the most important films at Slamdance and 2019 as well.
Posted by Steve Kopian at January 25, 2019