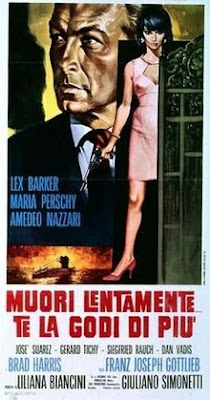 Messy spy (satire?) film has an Italian millionaire with a love of model trains stealing an atomic bomb and blackmailing the Americans to get it back. They are aided by a German secret agent with a love of the ladies.

Much too long and awfully rambling film never pulls it together. Never mind that decades of spy spoofs have muted it's humor, this almost two hour movie is a chore. While it works in fits and starts mostly it just rambles all over the place before ending.

While not bad as such it isn't anything that is going to hold your attention. This is more the sort of thing that you'd put on if you were sick in bed so you could be kind of entertained as you drifted in and out of sleep.

I'm still trying to know why Lex Barker's character is nicknamed Mr Dynamite since he isn't all that exciting. I wish he was back playing Tarzan.
Posted by Steve Kopian at January 20, 2019