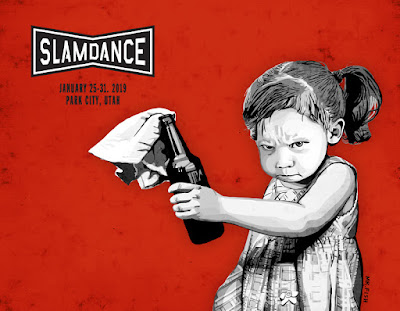 Starting Friday and running to the 31st is Slamdance- the kick ass punk rock film festival that really is the best place to see the really cool films before anyone else. Running at the same time and in the same city as its big sister dance, Sun, Slamdance is the place  you go to see the films that will still haunt you a year from now.

That last line is important- Yes Sundance will have most of the films that all the PR people will be flogging and positioning as the big films for the rest of 2019. Yes news coming out of that festival will be star studded and be the films that are full of talk of the next big thing... but  Slamdance you’re going to get the films that stay with you forever.

I am deadly serious on that last point.

Year after year the films at Slamdance are the ones that make you run up to friends and complete strangers and grab them and say “You have to see this film”. This year there is a film called A GREAT LAMP which since I saw it a couple of weeks back I have been flogging like mad to my friends. I managed to show it to Nate Hood who yelled at me when it was done- How could I show him a film that rocked his world like that? He was so rocked, in a good way, by the film that he sent me a review for me to run. Yes A GREAT LAMP is getting two rave reviews because it’s that good. (Go buy tickets)

Another kick ass filmthat will haunt you is 3- IN THE ABSENCE OF ANGELS. A short film, the third in a series, which is about the aftermath of a sexual assault. It’s a deeply troubling film and easily one of the best films I’ve seen so far for the festival. It will rock your world and make you think and feel. Playing as part of the Episodes section it is highly recommended.

An absolute small gem is DOG IN THE WOODS, which is exactly that. A dog escapes his house and runs into the woods for a night of exploring. It is a visual and aural delight as we see the sensory rich world the dog experiences when away from the dull home life. If you’ve ever had a dog that loves to sniff and smell his way along your walk then this film might clue you in to what he/she experienced. As with many Slamdance films it will forever change how you see the world. Highly recommended.

I also am incredibly high on MEMPHIS '69 about a blues fest in 1969 which will knock your socks off. Its all about the glorious music which will have you moving to the beat.

All of the reviews for Slamdance are embargoed so look for the the goodies that JB and myself have ready for you to drop starting Friday and running through and past the end of the Fest.

Email ThisBlogThis!Share to TwitterShare to FacebookShare to Pinterest
Labels: slamdance 2019