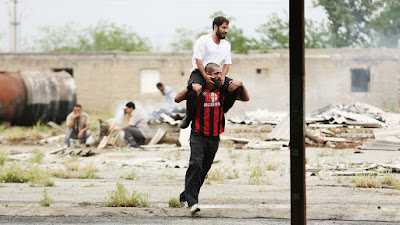 Navid Mohammadzadeh gives a stellar performance as the loud off kilter Shahin in Sheeple, a violent, occasionally funny crime film set on the edge of Tehran. It’s a performance which will get under your skin, often annoy you and ultimately kind of break your heart.

Shahin is the brother of a crime lord in Iranian capital city. They exist in the fringe and slums of the city, not in the high rise. Despite being crime lords they are still struggling to get by selling drugs and running scams. At some point a major scandal erupts when Shahin’s hair dresser sister is filmed showing a man her pony tail to a man in a car. Violence and heartache result.

Anyone expecting the typical genteel Iranian drama is going to be shocked. While not as graphic as similar films from around the world, Sheeple is still just as down and dirty. Despite the humor, these are bad people. People are beaten, abused and stabbed. There is a nasty shoot out with the police. Director Houman Seyyedi is not sugar coating the world of these men and women and we as an audience are abused as a result.

One of the thematic threads of the film is the abuse of children. If it’s not outsight abuse the implication of futures as little more than slaves is more than just implied. Kids are around when bad things happen. Shahin’s brother knows the value and valulessness of kids because he has set up an orphanage to act as a training ground for his army of criminals. At the same time he doesn’t really care what happens to them. (And there is a some shots toward the end that will break your heart.)

Sheeple is many things from a thought provoking to a kick in the heart to a great film. One of the truly great films at the First Iranian Film Festival New York and as such It is absolutely a must see.