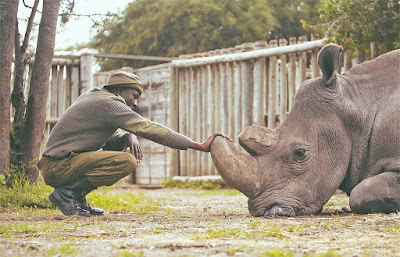 The film follows the three main caretakers: James, Jojo, and Jacob (I met James when I was there, and he showed us around). These men spend 10 months of the year there, away from their families, to protect the rhinos. You can see that these men are dedicated to taking care of the rhinos, and really get attached to them. They are true heroes.

This film is a real look at what extinction looks like. We get to see it first hand through Sudan. It’s heartbreaking. Heartbreaking that humans have done this. I hope everyone sees this documentary, it’s such an important film to see, and make sure you have tissues nearby.
Posted by Steve Kopian at January 27, 2019