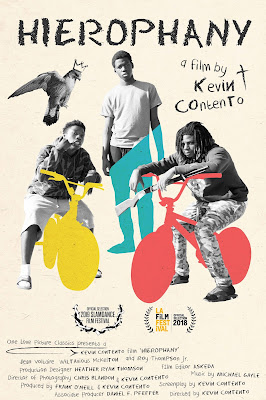 To be honest I don’t know exactly is going on with HIEROPHANY but god damn its magical.

The film tells the story of three young men in the fields around a farm in Florida. They are hunting for rabbits in the hope of making some money. They are watched over by a falcon. Where it all goes and how it goes is the film.

Gorgeously shot in black and white this film is an absolute delight for the eye. Every shot (except one) is perfect in composition and perfect on how it conveys a mood or emotion. This is as good as filmmaking gets.

To be honest I don’t know what it all means but I like it. I like the feel of the film. I love the sense of character. We don’t know a great deal about them but I did get the sense of someone behind the eyes.

I know it maybe a pipe dream but I’d like to see this expanded into a feature- or if not a feature I want to see what director Kevin Contento can do on a larger canvas. If its half as good as this it will b something special.
Posted by Steve Kopian at January 28, 2019