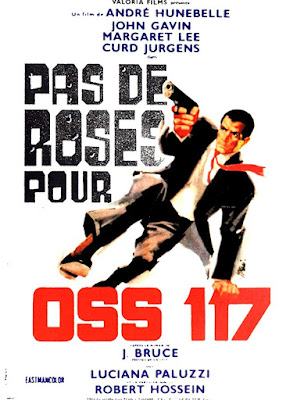 If you've ever wanted to know what the Bond films might have looked like if Sean Connery hadn't come back to do DIAMONDS ARE FOREVER then track down OSS 117: MURDER FOR SALE. Removed from most people's memory is the fact that after George Lazenby walked away from being Bond the producers signed John Gavin.to star. They then agreed to Connery's insane salary demand and Gavin was out (though he got his full salary). Interestingly this film exists and with a villain played by  Curd Jurgens it can be seen as a sort of Bond film.

In the film OSS 177 has plastic surgery to look like a noted killer named Chandler. Chandler is being recruited or an organization that kills for money and specializes in political killings that will turn a big profit for one side or another. Sent to kill a peace negotiator he as tree days to complete his task . To make sure he stays on point he has been given a poison that needs to ave the antidote administered each of the three days. After the third dose he will be immune.

Closer in feel to the first Bond films before spectacle took over plot MURDER FOR SALE is a solid spy drama. A mix of clandestine operations and the occasional fight the film is a solid little spy drama. Not having seen any of the other films in the series I can't say how it compares, but on it's own terms it is quite entertaining.

As a glimpse of what might have been Gavin makes a solid spy. Deftly handling the snooping and the fisticuffs he makes a solid hero and he would have made a great Bond. If one need proof watch his scenes with Jurgens, Stromberg on THE SPY WHO LOVED ME and you can tell he holds his own against Bond level villainy.