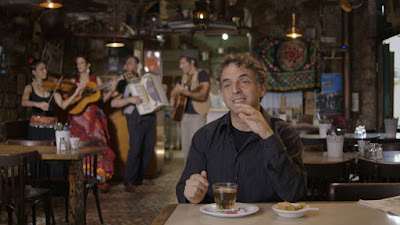 Portrait of writer Etgar  Keret that mixes interviews, recreations, stories, animation and surreal narrative turns in order to paint a one of a kind picture of the well loved writer.

Told as the story the directors tell the custom agents in Israel about why they are going to the country (the use the would shoot instead of film and it gets messy) they then have to explain what they are doing and why. As they start and stop Keret's stories are told, characters come to live and a good time is has by all.

An early favorite film of 2019, this film delighted me. While I had no idea who Keret was before the film I a loading up on his books not long after. Keret's wild and weird way of seeing the world  some how matches up with mine. Why can't a beautiful girl become a hairy fat man? Why wouldn't people with wings pretend to be angels?

I have nothing but love for this film which made me smile from ear to ear for 68 minutes, which is all one can ask for.

One of the best films of this year's New York Jewish Film Festival, it is highly recommended.