What is Democracy? (2018) Opens Wednesday 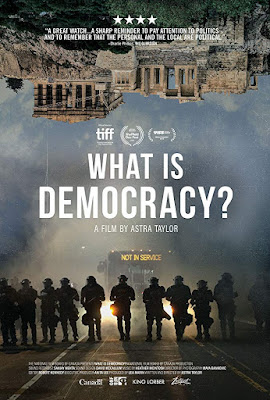 This exploration of what exactly is democracy and what that means for the way that we govern ourselves is a bracing intellectual exercise that is a frightening explanation of how and why democracy seems to be in decline. It also explains why and how we ended up with Donald Trump (he is a demagogue exactly of the sort that Plato warned us about two thousand years ago).

A heady mix of ideas the film doesn’t just deal with academia but also asks people on the street from all over the world what they think. As a result instead of having a purely American answer to what the concept means we get something bigger and greater that fully embraces the world in general and explains why people strive to have a voice in their government, even if in practice it often looks like we’d rather be ruled over by a benevolent dictator.

Full of trains of thought and ideas that will sit with you for days WHAT IS DEMOCRACY will haunt your thoughts and may even get you to go out and actually try to do something to keep your rights.

This will be one of the best and most important films you'll see in 2019.