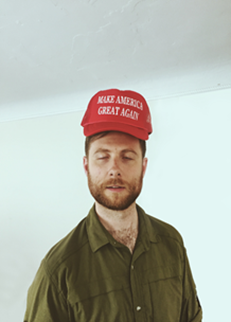 Shot entirely on iPhone (the film is told with a vertical framing) crime thriller is made up of video clips found on the  iPhone found after a crime. It charts the descent of a marketing exec in California as he makes friends with a member of a right wing militia and swings farther and farther to the right and becomes more and more paranoid.

This film about changing face of America this is an important one. I find it interesting that it has taken two years of Trump in the White House before we have started to get attempts to explain how the hated filled rhetoric is altering the lives of millions. That AMERICA THE BEAUTIFUL is taking a head on, in your face approach makes it something more than a film that can be easily dismissed.

As good as the film is on many levels it does suffer from some of the problems that plague many found footage films, particularly the questions of why did the person shooting actually choose to shoot this particular moment (a number of scenes are not be the sort of thing anyone would film except if they were telling a story)and why things suddenly take on a "professional" look when something important is happening? Its a forgivable sin that comes as a trade off with the immediacy of the tale it is telling.

Having World Premiered last night at Slamdance the film is about to begin a festival march so keep an eye out for it.
Posted by Steve Kopian at January 27, 2019