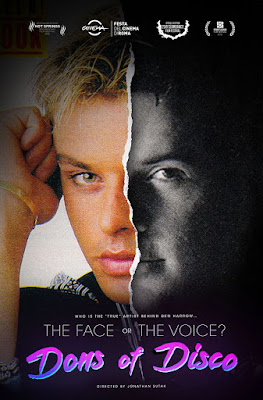 Sometimes when singers such as Milli Vanilli are outed as not singing it destroys their careers. In the case of Italian superstar Den Harrow people didn't seem to mind.  The film is the story of singer Thomas Barbey who was the voice and one of the song writers for a made up singer. Created by the record company Barbey was hired to sing and write songs for a good looking guy, Stefano Zandri, who the producers found in a disco. Charismatic, to a fault he was the perfect front man but he really couldn't sing. After several years behind the scenes Barbey walked away and focused on his own music and photography. When he realized he should be getting credit, if not royalties he held a press conference to reveal the true story...and it didn't go quite as expected.

Being completely unaware of Italian pop I had no idea what this story was all about and as such I went into the film completely blind. It resulted in my being completely delighted at discovering a really wonderful film that doesn't remotely go as expected. I was certain that this was a case of an Italian Milli Vanilli but there is much more to the story with the result we are kind of held captive to the tale because we really want to see where it goes. I absolutely love when  a story refuses to follow the expected path and shows us all sorts of new things, such as a giving us a glimpse into the life of an artist in the shadows and a lip syncing superstar.