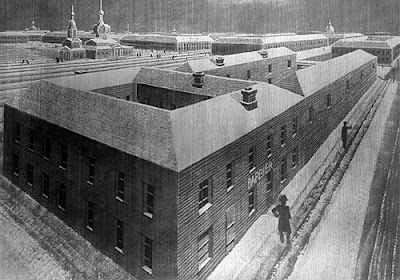 The images in the films are haunting and dream like. Shadows and light collide to produce visual which write themselves on your brain. Because they not mass produced, the pinscreen films are truly unique and one only runs across a film now and again. That FI:AF is running a whole collection and having a workshop i making the films is something truly special

The following films in the pinscreen collection were made available for review.

NIGHT ON BALD MOUNTAIN (1933)
First pinscreen film ever produced is a fantasia on the classic piece of music that Disney used to close the original Fantasia. Despite being in black and white its very clear that Disney lifted ideas and bits directly from this nifty little short.

LE NEZ (The Nose)
Based on the Gogol story about an official who loses his nose and what happens when  it wanders off. Odd little film is intriguing in it's look but its percussive score annoys more than helps.

MINDSCAPE (Le Paysagiste)
A painter enters his painting and wanders around. Moody little film that sucks you in and carries you off.

THE HUNTING LESSON
A young boy had heard his neighbor was a great hunter, but when the man takes him out into the wild the boy learns something unexpected. Good film based on a children's book about life.

HERE AND THE GREAT ELSEWHERE
An exploration about the meaning of life. Full of wonderful visuals, I'm not sure what it means but it sure delighted my eye.

For tickets and more information on the pinscreen sidebar go here.
Posted by Steve Kopian at January 24, 2019