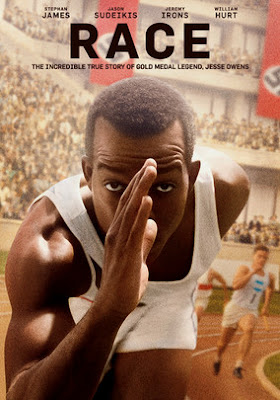 Race is the story of Jesse Owens and his record setting Olympic wins. The film follows Owens, played by Stephan James, as he is trained by Larry Snyderplayed by Jason Seudakis and goes to Berlin for the Olympics. On all levels Owens has to fight through racism both at home and abroad.

A moving story about one of the greatest athletes the world has ever seen is given a serviceable telling by Hollywood. There is nothing really wrong with the film except that the film has dress up quality that kind of diminishes from the weight of the story. It feels less like history than a story than something that is good for us. The film is also hampered by the casting Jason Seudakis who is a little too light for the material. I know he is capable of doing heavy drama he does have a certain strength that radiates out from him but at the same time he never fully blends into the film and we are pulled out of the period when he walks on screen.

While I could quibble with a couple of one or two small details (the end text blurbs should have ended with the note that Owens couldn’t even get a job instead of beginning with it) I did like the film and I’m writing it up because the film is most definitely worth seeing- more so now that it is on cable and is streaming.
Posted by Steve Kopian at January 05, 2019