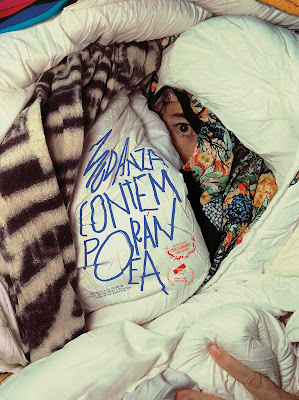 MUDANZA CONTMPORANEA is a hard to describe film. It has something to do with the random things in our lives...and a ghost... I think. I know that much of the film made me laugh out loud as director TeoGuillem dances around in various sheets and stuff.

That may not sound thrilling, but trust me it’s hysterical in the right sort of way as the mix of sound and image are made glorious by stunning editing. From the instant we get a sheet drifting to a vacuum cut to someone dancing in the same sheet I was hooked. It’s wonderful filmmaking.

But it’s not perfect. There are some long passages where we watch a woman on a TV screen which kind of kills the momentum of the film. I’m certain that’s tied to the deeper meaning of the film about the ghost of the past, but it’s nowhere near as much fun.

I am probably missing the point of what the film is about by just focusing on the crazy motion but god damn its great.