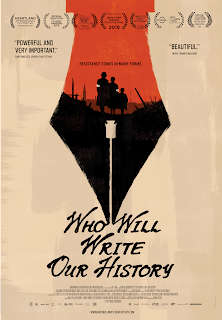 As the Warsaw Ghetto was being destroyed the people inside it collected their stories and buried them in the city. Years later the trove was discovered and we now have a first-hand account of what life was like during the war.

Mixing talking heads with recreations and actors reading the words of the Jews in Poland Who Will Write our History is a respectful portrait of life during war time. And while the film is very informative, is kind of dull. Blame the construction of the film which is standard documentary formula and the reading of the words which tends to be not as passionate as it could have been. Its not bad but it’s not great either. I was engaged because I wanted to hear the stories but not because I was drawn into them.

Worth a look for those who are interested in the subject, for everyone else, not so much.
Posted by Steve Kopian at January 18, 2019