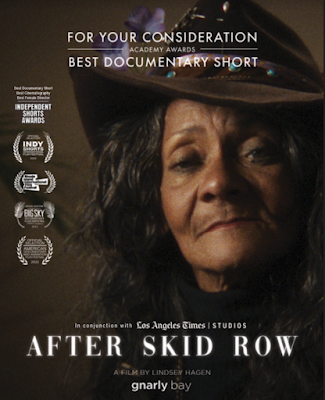 Portrait of Barbie Carter, a once homeless woman now in her own apartment after ten years. Though Carter now has a place the years without one have left their mark.

Oscar short listed film (getting an Envelope Please screening on Thursday in LA) is going to rock your world. Not only is this a killer portrait of person you need to meet, but this is also an important portrait of what happens after you stop being homeless.  Most people would think that the world becomes skittles and beer but that isn't the case. Just because you stop being homeless doesn't mean that you leave that behind and director Lindsey Hagen shows us, clearly, why that is the case.

This film is a must see.  It's a film that has just a big a punch as a feature, and indeed I would love to see it expanded.

Having seen a good number of Oscar Long Listed Shorts (expect lots of short reviews over the next 4 weeks) I can honestly say that I think there is a good chance the film will end up with a nomination.