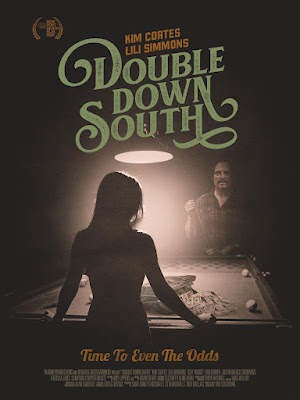 Diana blows into a small Southern town and is noticed at a run down plantation turned pool hall. Quickly showing that she can more than hold her own against the big guys, Diana convinces Nick that he should stake her. With Little Nick acting as her coach/confidant she begins to a run to a fortune playing keno pool.

Film noir collides with a caper film that is a hell of a ride.  This is a twisty turny film that has a great deal going on. There is so much going on I'm not going to really discuss the plot since I don't want to give anything away.

I will say that the film is trying to be more than just a thriller. This is a film that wants to take on both racism and misogyny, being set in a world where anyone not a white man is a target. While the film gilds the lily  a bit to make it's point, the film does make a point, at times taking the piss out of the good ol boys.

If I have any quibbles with the film is that the film feels long at running just shy of two hours. While I wouldn't know what to trim, there is a moment somewhere where in the middle where I just wished it moved a tad faster.

Nit pick aside, this is a solid film you'll want to see when it plays near you