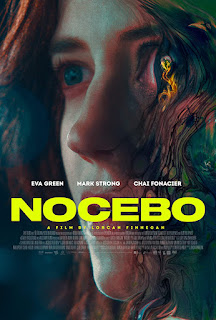 On paper, Nocebo should be a wonderful time at the movies. Eva Green and Mark Strong? Check. A mystical movie with a strong message? Check. A disguised revenge thriller? Check. In practice, Lorca Finnegan’s slow-burn thriller overwhelmingly dull movie with a premise that doesn’t reveal itself until too far into the runtime to be effective.

Nocebo follows Christine (Eva Green), a fashion designer who is trying to put her life back together as she recovers from an unknown illness. When Diana (Chai Fonacier), a Filipino caretaker, unexpectedly arrives at her home, Christine assumes she must’ve just forgotten that she hired her (forgetfulness has been a symptom of her illness). Diana eventually wins over everyone in the house, except for Christine’s husband, Felix (Mark Strong), who is extremely skeptical of the situation. As the movie unfolds, it becomes more and more obvious that this living situation is untenable.

While Nocebo is well-shot — with some really nice practical effects — the story spreads itself far too thin to encompass the many themes the filmmakers wanted to hammer home. The movie is about a lot: family, sweatshops and working conditions, folk healing, collective guilt, race, and more. It’s attempt to comment on so many facets of the world is admirable, but doesn’t make for all that interesting of a horror movie. In the end, too, they make everything so specific to our main characters that there is seemingly no take away for the audience regarding any of these concepts. Eventually these ideas circling the movie feel mostly like a prop used to tell a revenge thriller.