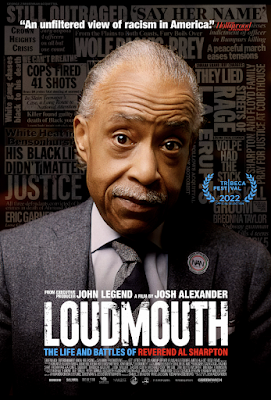 I have mixed emotions about Al Sharpton. I often questioned what his motives were since to me, viewing his actions through the local media, he seemed to always be trying to make something about him more than the situation he was trying to help. Over time my feelings changed and I warmed to him a bit. Realizing that I only knew him from TV news I was looking to finally finding out something about the man in this film.

Billed as a biography of Reverend Al Sharpton this is in fact something else entirely. It is a recounting of some of the Civil Rights battles that Sharpton was a part of over the last five decades. It delves into the various fights from his point of view. We see the battles his words and his words. We go from Howard Beach to today. Much of the news footage was too raw to ever show on TV and it comes as a revelation as we really see what Sharpton was fighting against. Seeing the additional clips is bracing. This is an excellent portrait of racism in America.

The trouble is that it not only doesn't it connect things up as well as it should, we drift from handpicked moment to the next. Worse it doesn't give us any real insight into Sharpton the man or the arc of his life. The moments are just a series of highlights of his battles that don’t always flow to the next. While the film's title says this is about  the Sharpton's life, and we get bits of that,  we don’t get enough to have a real sense of him as a person. Almost every moment when he is on camera he is "on". He is preaching to us, not talking to us. He is speaking of his causes, and nothing really beyond that. The only time we see any real glimpse of the man are in odd moments captured by the film crews either for this documentary or the news.

To be honest I am disappointed in this film a great deal. I wanted a film that at least gave us some sense of the man beyond the headlines. So much of this film is fantastic at showing the hatred and injustice that filled Sharpton’s that it’s a real shame that the thread that should be linking them together, the man himself, remains so distant and a cipher. This could almost be a series of short films on various subjects where Sharpton appears. The end of the film should come and we should see him as a grand crusader and not just a guy.